The first basketball game I ever went to was an otherwise meaningless January tilt between the Seattle Supersonics and the Los Angeles Clippers. Of that game, I remember two things: a buzzer-beating Gary Payton dunk sending the game to overtime (it was almost definitely Desmond Mason who actually did this, but Payton is what I remember), and a fan sitting courtside behind the basket who, from where I was sitting in the nosebleeds, looked almost like a scarecrow. I figured with some disappointment that I would likely never find out who that person was.

That fan, of course, turned out to be Jimmy Goldstein, the incomparable culture mogul who’s developed a minor cult following in the past few years as an NBA superfan and high fashion aficionado. Watch enough high-stakes NBA games and you will inevitably spot Jimmy mingling with players in pregame layup lines, seated contentedly with an Eastern Bloc supermodel or just standing in silent observation of the athletic marvels before him. He goes to over 100 games a year, which includes a rigorous travel schedule during the NBA playoffs. He’s a fan’s fan, and a player’s fan. He’s not doing it for the ‘gram, and he’s not complaining about back-to-backs.

It’s not just that he’s the Forrest Gump of Hardwood Classics, it’s that he knows everybody, from max-contract guys to rookies, from head coaches to color commentators. I’ve seen more than one fringe D-Leaguer find Jimmy during warmups and give him a hug. He’s loved by everyone who makes a living or once made a living in the NBA. I’ve long wondered what’s made Jimmy so popular, if he was some sort of Worldwide Wes-ian éminence grise. I didn’t ask him that, but I did get a clear answer about why everyone takes to the guy: he’s good people, plain and simple, and he loves basketball.

My first time on the court reporting at an NBA game, it seemed appropriate to go see Jimmy. He was willing to pause his enjoyment of the shootaround before Game 5 of the Clippers/Blazers series to talk to me for a piece about the Clippers playing through injuries, which you can read at VICE Sports.

Below is a transcript our interview, edited and condensed a touch. 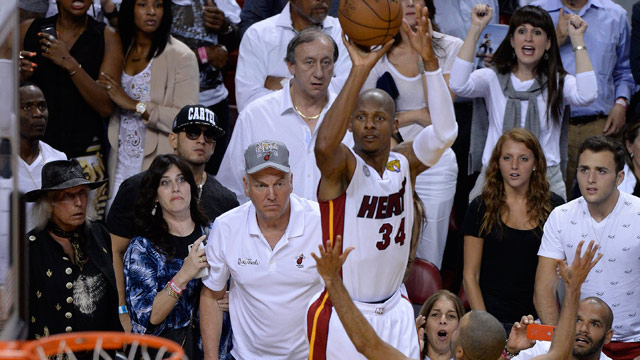 Louis Keene: The Clippers are playing without Blake and Chris Paul. Do you feel like you’re seeing an inferior product without them?

Jimmy Goldstein: It’d be a real upset if they pull through the series now, but I’ve seen the second unit play really well this season. [They beat] Utah — well, they rested the whole first team — but I don’t see how they can win two more games.

Do you think Golden State can make it through without Curry?

Curry will be back before they have any must-win games, so I don’t think that will affect them at all. It’s not a very serious issue, from what I’ve read. I wouldn’t be surprised if he came back earlier than 2 weeks.

What designer are you wearing right now?

What about the hat?

The hat I had custom-made in Paris, I designed it myself.

That’s pretty legit. How am I doing as far as my dress for the game?

A little too conservative for me.

What can I say…it’s Nordstrom. Who did you bring to the game tonight?

Actually, I was down in Houston over the weekend for two games, and a friend from Houston treated me to two courtside seats, so I have to reciprocate tonight, so he’s coming. No girl tonight.

You’re donating your house to LACMA. What caused you to do that, and where are you going to live?

Do you remember Jon Buscemi, the shoe designer?

I used to work in an office with him, and he told me this great story about when he went to your house. He said your house is all silver and gray…

Well, everything in the house is concrete and glass. That’s the way it is.

And he said on top of the ceiling, you have a picture of Kate Moss wearing a Jimmy Goldstein t-shirt.

Well, it’s not on my ceiling, but it’s on my countertop.

He said that you walked in, while he was preparing for the photoshoot, and you said something, and it was this great line, and I don’t remember what it was.

Yeah. His shoes are fabulous. Do you own any?

Yeah, he came over and did a photoshoot of me wearing the shoes. I didn’t know what it was all about. I just went along with it. (laughs) At that time, he was just starting.

Yeah, he had a desk in the office I was working in, and he had a bunch of cool fabrics on it, and I just started talking to him, and he’s a great guy. I like him. How did you get in touch with him?

I don’t know…someone else set it up. He asked if I would pose for some photos for the shoot.

Have you ever had any great basketball games on the very cool basketball hoop you have at your house?

No, that’s one thing that hasn’t happened.

You gotta get a 3 on 3 tournament or something!

It’s not in the greatest condition because the driveway is sloping. I’ve got this amazing new tennis court, and I was originally going to have a hoop on the tennis court.

I stopped playing basketball. I’ve always been a tennis player since I got my own court a few years ago, so now I just play tennis. So I’ve stopped shooting hoops. But I used to be a good shooter.

You’re originally a Milwaukee guy, right? I lived in Madison the last few years ago, and I love Wisconsin and I love the Bucks. Do you think they have a chance at taking the East next year?

Well that’s…a little too much. But I haven’t watched them very much.

Do you ever get consulted on rule changes?

I wish I would. Adam Silver, for example, last year, asked me about the intentional foul rule. He wanted my opinion. But in general, they haven’t.

What did you say?

I’ve got some mixed feelings about it, but on balance I said they should change the rule. It looks like he will.

You could have altered Clipper history if you had said, we have to change this. The whole NBA was in your palm! I think the rule they should add is let people goaltend on the rim.

That’s how they can get the athletes back in the game.

One thing I’d like to see, which no one ever talks about, is to get rid of this [points to the corner three]. Let the line just continue its normal course.

Ohh, so that there’s no corner three.

The corner three is the most sickening shot in basketball.

Because the guy’s always wide open, it’s almost like a free throw.

That’s true. But why sickening?

I think that’s a really cool idea. That could change the NBA too – offenses are designed around this shot.

Yeah — a guy is standing here almost every possession.

Do you think the Clippers have any advantage tonight, with an underdog profile?

The advantage they have is psychological, because I noticed in game 4, they were more uptight than I’ve ever seen them. From Doc Rivers on down. I watched them in warmups, there wasn’t one smile anyplace. And they showed it in the first quarter, when no one except Chris Paul could hit a shot. Meanwhile, the Trail Blazers were loose because no one expected them to win. Now, they’re expected to win, so we’ll see how that affects them.

That’s interesting – we saw that in game 3, when the Clippers gave away a late lead. That was it.

I would love that.